XingBao XB-03027 All Terrain Vehicle Review, Is It the king of Off-road Adventure？

Last time, we did a review of the XingBao Unimog Benz off-road truck. The effect of this truck made many friends feel very good. So today we are going to make the second vehicle of this series. The Siberian conqueror, number XB-03027, the bricks’ number is the same as Benz Unimog. How does it perform? Let’s try it out together. 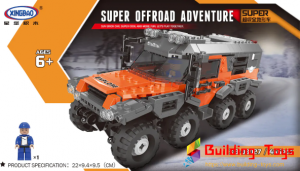 This Set of mini Siberian conquerors has a total of 529 pcs, which is the most popular work among “Super Offroad Adventures” series. The Unimog off-road truck we made last time was very shocked by its body twisting performance. The off-road performance he showed was also very outstanding. Can his off-road performance surpass that Mercedes truck? Let’s try it together.

This set of mini Siberian conquerors has only one Minifigure inside. This Minifigure looks a bit cowboy-style. The big cowboy hat, plus the vest inside, does look a bit like a western cowboy, but with a white body, white pants, a brown hat, and blue hands, this color combination is a bit strange. This figure is also a special design of XingBao. As I said last time, his hands can perform various actions. Of course, assembling its hands is just as difficult as that of the off-road truck. 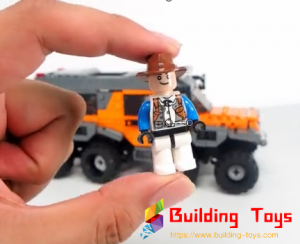 We put this figurine in the car to simulate how he looked when driving.

In addition to the two doors, there is a roof like a sunroof above the cab, which can also be opened here. Once opened, you can see the driving room. 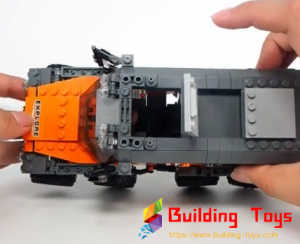 In addition to the three places that can be opened in the front, its tail box can also be opened. When you open the trunk, you can see that there is nothing in the compartment. Such a large space should be very good for hiding private money. 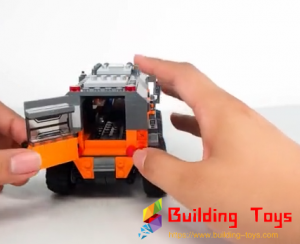 Unlike the Mercedes-Benz off-road truck, this ATV has 8 tires, so it has a special feature called “linear mode”. What is “line-mode”? Let’s take a look at its chassis, you can see that the eight tires of the chassis can make consistent actions. Instead of going straight or turning, the car can go sideways. Of course, because the amplitude of the tire swing is not very large, the effect of oblique walking is not very obvious. If you look at it from another angle, you can still observe that he is walking diagonally.

Everyone is most concerned about its off-road mode. Let me tell you, you can see that its tires can be adjusted after being lifted up, which makes its tires meet obstacles to reflect the effect of off-road. 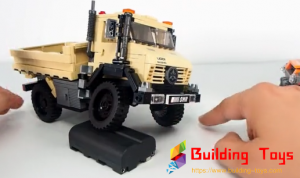 For the same battery, we drove this mini Siberian conqueror from the side. Did you see it? When the first tire in front of him was overhead, all the tires in front of it were emptied. According to the instructions, it should be able to shake left and right, but in fact, you can find that the effect of shaking is not good, and Can only reach such a magnitude. Therefore, if we were to take this Siberian conqueror for a static display, we would not be able to make that kind of more challenging and difficult movement like that Mercedes-Benz truck.

If you don’t look at the static performance of that Mercedes-Benz off-road truck, you just look at the performance of this Mini Siberian conqueror across the height of two blocks. In fact, it is still possible. Because of its chassis height, there is no way to compare it with Mercedes’ trucks, because his tires are much smaller than trucks. This is a minor regret.

Well, finally, let’s talk about the price. The price of this mini Siberian conqueror on our website is $19.2, including postage. If necessary, you can click “Buy Now” below to purchase.